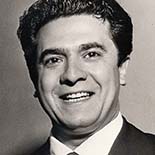 He was known as the “Golden voice” or “The most beautiful voice”, as the true successor of Beniamino Gigli. He was also known for his long-term performance and recording association and brief romantic episode with the soprano Maria Callas.