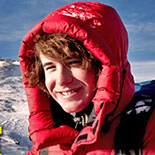 The previous record for youngest to climb Everest was held by Ming Kipa of Nepal who was 15 years old when she reached the summit in 2009. Jordan was the youngest person to summit Everest until Malavath Poorna, an Indian girl summited when she was 13 and eleven months – just one month younger than Jordan when he reached the summit. He was inspired to climb the tallest mountains of each continent when he saw a painting in the hallway of his school that had the seven continents’ highest mountains. He climbed the Vinson Massif in December 2011, breaking the record of George Atkinson being the youngest climber in the world to complete the Seven Summits, at the age of 15 years, 5 months, 12 days.