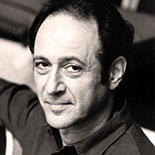 Stephen Michael Reich (born October 3, 1936) is an American composer who, along with La Monte Young, Terry Riley, and Philip Glass, pioneered minimal music in the mid to late 1960s.

His innovations include using tape loops to create phasing patterns (for example, his early compositions It’s Gonna Rain and Come Out), and the use of simple, audible processes to explore musical concepts (for instance, Pendulum Music and Four Organs). These compositions, marked by their use of repetitive figures, slow harmonic rhythm and canons, have significantly influenced contemporary music, especially in the US. Reich’s work took on a darker character in the 1980s with the introduction of historical themes as well as themes from his Jewish heritage, notably the Grammy Award-winning Different Trains.

Reich’s style of composition influenced many composers and groups. Writing in the The Guardian music critic Andrew Clements described Reich as one of “a handful of living composers who can legitimately claim to have altered the direction of musical history”. The American composer and critic Kyle Gann has said Reich “may…be considered, by general acclamation, America’s greatest living composer”.

On January 25, 2007, Reich was named 2007 recipient of the Polar Music Prize with jazz saxophonist Sonny Rollins. On April 20, 2009, Reich was awarded the 2009 Pulitzer Prize for Music, recognizing Double Sextet, first performed in Richmond March 26, 2008. The citation called it “a major work that displays an ability to channel an initial burst of energy into a large-scale musical event, built with masterful control and consistently intriguing to the ear”.