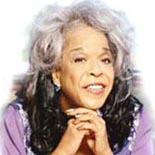 She started her career in the 1950s as a gospel, pop and jazz singer, scoring a hit with her 1959 single “Don’t You Know?”. In the late 1960s, she had hosted her own talk show, Della, which ran for 197 episodes.Through four decades of acting, she is best known for playing Tess, the lead role on the 1994-2003 television show Touched by an Angel. In more recent times, she became an ordained New Thought minister in the Understanding Principles for Better Living Church in Los Angeles, California.

That’s the way He is
Yes, for each door that closes
The good Lord leaves a window open
So step on up, make no excuse
You got a power just waiting to get used
There’s a light and it’s shining for you
The light is in your heart
And it will lead you through
When you are stuck in a rut
And you think you can’t cope
Just call on the spirit
Whatever you do, don’t give up hope
‘Cause for each door that closes
The good Lord will leave a window open