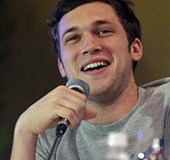 Phillip LaDon Phillips, Jr. (born September 20, 1990) is an American singer-songwriter, recognized as the winner of the eleventh season of American Idol on May 23, 2012.

His coronation song “Home”, released after his win, became the best selling of all coronation songs. His debut album The World from the Side of the Moon was released on November 19, 2012.