Francesco Petrarca (July 20, 1304 – July 19, 1374), commonly anglicized as Petrarch, was an Italian scholar and poet in Renaissance Italy, and one of the earliest humanists.

Laura and poetry: On April 6, 1327, after Petrarch gave up his vocation as a priest, the sight of a woman called “Laura” in the church of Sainte-Claire d’Avignon awoke in him a lasting passion, celebrated in the Rime sparse (“Scattered rhymes”). Later, Renaissance poets who copied Petrarch’s style named this collection of 366 poems Il Canzoniere (“Song Book”). 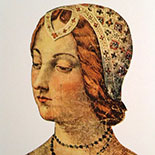 aura may have been Laura de Noves, the wife of Count Hugues de Sade (an ancestor of the Marquis de Sade). There is little definite information in Petrarch’s work concerning Laura, except that she is lovely to look at, fair-haired, with a modest, dignified bearing. Laura and Petrarch had little or no personal contact. According to his “Secretum”, she refused him for the very proper reason that she was already married to another man.

He channeled his feelings into love poems that were exclamatory rather than persuasive, and wrote prose that showed his contempt for men who pursue women. Upon her death in 1348, the poet found that his grief was as difficult to live with as was his former despair. Later in his “Letter to Posterity”, Petrarch wrote: “In my younger days I struggled constantly with an overwhelming but pure love affair – my only one, and I would have struggled with it longer had not premature death, bitter but salutary for me, extinguished the cooling flames. I certainly wish I could say that I have always been entirely free from desires of the flesh, but I would be lying if I did”.

While it is possible she was an idealized or pseudonymous character – particularly since the name “Laura” has a linguistic connection to the poetic “laurels” Petrarch coveted – Petrarch himself always denied it. His frequent use of l’aura is also remarkable: for example, the line “Erano i capei d’oro a l’aura sparsi” may both mean “her hair was all over Laura’s body”, and “the wind (“l’aura”) blew through her hair”. There is psychological realism in the description of Laura, although Petrarch draws heavily on conventionalised descriptions of love and lovers from troubadour songs and other literature of courtly love. Her presence causes him unspeakable joy, but his unrequited love creates unendurable desires, inner conflicts between the ardent lover and the mystic Christian, making it impossible to reconcile the two. Petrarch’s quest for love leads to hopelessness and irreconcilable anguish, as he expresses in the series of paradoxes in Rima 134 “Pace non trovo, et non ò da fa guerra”: “I find no peace, and yet I make no war:/and fear, and hope: and burn, and I am ice”.

Laura is unreachable – the few physical descriptions are vague, almost impalpable as the love he pines for, and such is perhaps the power of his verse, which lives off the melodies it evokes against the fading, diaphanous image that is no more consistent than a ghost. Francesco De Sanctis remarks much the same thing in his Storia della letteratura italiana, and contemporary critics agree on the powerful music of his verse. Perhaps the poet was inspired by a famous singer he met in Veneto around 1350’s. Gianfranco Contini, in a famous essay on Petrarch’s language (“Preliminari sulla lingua del Petrarca”. Petrarca, Canzoniere. Turin, Einaudi, 1964) has spoken of linguistic indeterminacy – Petrarch never rises above the “bel pié” (her lovely foot): Laura is too holy to be painted; she is an awe-inspiring goddess. Sensuality and passion are suggested rather by the rhythm and music that shape the vague contours of the lady.

IT WAS ON THAT DAYPetrach

It was on that day when the sun’s ray
was darkened in pity for its Maker,
that I was captured, and did not defend myself,
because your lovely eyes had bound me, Lady.
It did not seem to me to be a time to guard myself
against Love’s blows: so I went on
confident, unsuspecting; from that, my troubles
started, amongst the public sorrows.
Love discovered me all weaponless,
and opened the way to the heart through the eyes,
which are made the passageways and doors of tears:
so that it seems to me it does him little honor
to wound me with his arrow, in that state,
he not showing his bow at all to you who are armed.