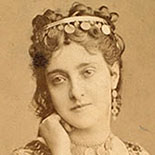 Adelina Patti (February 19, 1843 – September 27, 1919) was a highly acclaimed 19th-century opera singer, earning huge fees at the height of her career in the music capitals of Europe and America.

She first sang in public as a child in 1851 and gave her last performance before an audience in 1914. Along with her near contemporaries Jenny Lind and Thérèse Tietjens, Patti remains one of the most famous sopranos in history, owing to the purity and beauty of her lyrical voice and the unmatched quality of her bel canto technique.

The composer Giuseppe Verdi, writing in 1877, described her as being perhaps the finest singer who had ever lived and a “stupendous artist”. Verdi’s admiration for Patti’s talent was shared by numerous music critics and social commentators of her era.