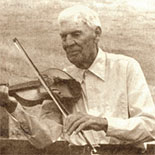 Charles Nelson Osborne, (December 26, 1890 – May 27, 1992), affectionately known as “Uncle Charlie,” was a musician in the Appalachian Mountains of southwest Virginia.

Osborne was born in what is now known as Cowan Osborne Hollow, named for his father, in Copper Creek, Virginia. He was regionally famous from the time he was about 15 until his death at age 101 in 1992.