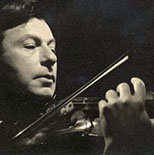 Widely considered one of the finest violinists of the 20th century, Milstein was known for his interpretations of Bach’s solo violin works and for works from the Romantic period. He was also known for his long career: he performed at a high level into his mid 80s, retiring only after suffering a broken hand.