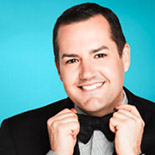 Ross Mathews (born September 24, 1979) is an American television personality who rose to fame as a correspondent, for The Tonight Show with Jay Leno, for which he was known as “Ross the Intern”.

Mathews has since gone on to numerous TV appearances, including Celebrity Fit Club, The Insider and as a weekly regular panelist on Chelsea Lately.