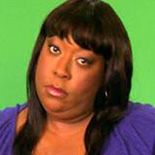 Before quitting her job as an electrical engineer in 2003, Love began to pursue a career in stand up comedy. She was the runner-up on Star Search 2003 and was named “Top 10 Comics to Watch” in both Variety and Comedy Central in 2009. She is currently one of the hosts of The Real talk.