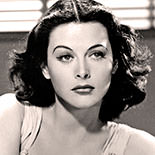 During World War II, Antheil and Lamarr discussed the fact that radio-controlled torpedoes, while important in the naval war, could easily be jammed by broadcasting interference at the frequency of the control signal, causing the torpedo to go off course. Lamarr had learned something about torpedoes from Mandl. Antheil and Lamarr developed the idea of using frequency hopping to avoid jamming. This was achieved by using a piano roll to unpredictably change the signal sent between a control center and the torpedo at short bursts within a range of 88 frequencies in the radio-frequency spectrum (there are 88 black and white keys on a piano keyboard). The specific code for the sequence of frequencies would be held identically by the controlling ship and in the torpedo. It would be practically impossible for the enemy to scan and jam all 88 frequencies, as a computation this complex would require too much power. The frequency-hopping sequence was controlled by a player-piano mechanism, which Antheil had earlier used to score his Ballet Mécanique.

On August 11, 1942, U.S. Patent 2,292,387 was granted to Antheil and Hedy Kiesler Markey, Lamarr’s married name at the time. This early version of frequency hopping, although novel, soon was met with opposition from the U.S. Navy and was not adopted. The idea was not implemented in the U.S. until 1962, when it was used by U.S. military ships during a blockade of Cuba after the patent had expired. Lamarr’s work was honored in 1997, when the Electronic Frontier Foundation gave her a belated award for her contributions. In 1998, an Ottawa wireless technology developer, Wi-LAN Inc., acquired a 49% claim to the patent from Lamarr for an undisclosed amount of stock.

Lamarr’s and Antheil’s frequency-hopping idea serves as a basis for modern spread-spectrum communication technology, such as Bluetooth, COFDM (used in Wi-Fi network connections), and CDMA (used in some cordless and wireless telephones). Blackwell, Martin, and Vernam’s 1920 patent seems to lay the communications groundwork for Kiesler and Antheil’s patent, which employed the techniques in the autonomous control of torpedoes.

Lamarr wanted to join the National Inventors Council, but was reportedly told by NIC member Charles F. Kettering and others that she could better help the war effort by using her celebrity status to sell War Bonds.

Lamarr and Antheil were inducted into the Inventor’s Hall of Fame in 2014.