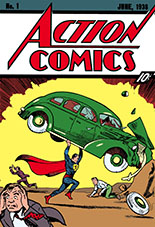 Kal-El, known as Superman, is a comic book superhero who appears in comic books published by DC Comics.

He is widely considered to be an American cultural icon. Created by American writer Jerry Siegel and Canadian-born American artist Joe Shuster in 1932, and sold to Detective Comics, Inc. (later DC Comics) in 1938. The character’s appearance is distinctive and iconic: a blue, red and yellow costume, complete with cape, with a stylized “S” shield on his chest. This shield is now typically used across media to symbolize the character.

The origin story of Superman relates that he was born Kal-El on the planet Krypton, before being rocketed to Earth as an infant by his scientist father Jor-El, moments before Krypton’s destruction. Discovered and adopted by a Kansas farmer and his wife, the child is raised as Clark Kent and imbued with a strong moral compass. Very early he started to display superhuman abilities, which upon reaching maturity he resolved to use for the benefit of humanity.

Superman’s first appearance was in Action Comics #1, published on April 18, 1938 (cover-dated to June 1938). In 1939, a self-titled series was launched. The first issue mainly reprinted adventures published in Action Comics, but despite this the book achieved greater sales. The year 1939 also saw the publication of New York World’s Fair Comics, which by summer of 1942 became World’s Finest Comics. With issue No. 7 of All Star Comics, Superman made the first of a number of infrequent appearances, on this occasion appearing in cameo to establish his honorary membership in the Justice Society of America.

Superman, given the serial nature of comic publishing and the length of the character’s existence, has evolved as a character.