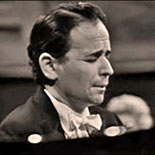 Janis made several recordings for RCA Victor and Mercury Records, and occupies two volumes of the Philips series Great Pianists of the 20th Century. His discography covers repertoire from Beethoven to David W. Guion and includes major piano concertos from Mozart to Rachmaninoff and Prokofiev. His pianism has been described as combining a Horowitzian technique with a sublime musicality akin to Cortot’s. He has a special affinity for Chopin and made a French film on him that was shown around the world.