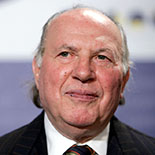 Imre Kertész (November 9, 1929 – March 31, 2016) was a Hungarian author, Holocaust concentration camp survivor, and recipient of the 2002 Nobel Prize in Literature, “for writing that upholds the fragile experience of the individual against the barbaric arbitrariness of history”.

Kertész’s writings translated into English include Kaddish for a Child Not Born (Kaddis a meg nem született gyermekért) and Liquidation (Felszámolás). Kertész initially found little appreciation for his writing in Hungary and moved to Germany. Kertész started translating German works into Hungarian — such as The Birth of Tragedy by Nietzsche, the plays of Dürrenmatt, Schnitzler and Tankred Dorst, the thoughts of Wittgenstein — and he did not publish another novel until the late 1980s. He continues to write in Hungarian and submits his works to publishers in Hungary.