Herschel originated the use of the Julian day system in astronomy. He named seven moons of Saturn and four moons of Uranus. He made many contributions to the science of photography, and investigated color blindness and the chemical power of ultraviolet rays. 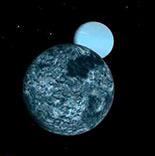 Herschel was born in Slough, Berkshire, the son of Mary Baldwin and William Herschel. He studied shortly at Eton College and St John’s College, Cambridge, graduating as Senior Wrangler in 1813. It was during his time as an undergraduate that he became friends with Charles Babbage and George Peacock. He took up astronomy in 1816, building a reflecting telescope with a mirror 18 inches (460 mm) in diameter and with a 20-foot (6.1 m) focal length. Between 1821 and 1823 he re-examined, with James South, the double stars catalogued by his father. For this work, in 1826 he was presented with the Gold Medal of the Royal Astronomical Society (which he won again in 1836), and with the Lalande Medal of the French Academy of Sciences in 1825, while in 1821 the Royal Society bestowed upon him the Copley Medal for his mathematical contributions to their Transactions. Herschel was made a Knight of the Royal Guelphic Order in 1831.