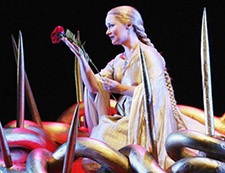 Rinaldo is an opera by George Frideric Handel composed in 1711.

It is the first Italian language opera written specifically for the London stage. The libretto was prepared by Giacomo Rossi from a scenario provided by Aaron Hill. The work was first performed at the Queen’s Theatre in London’s Haymarket on 24 February 1711. The story of love, battle and redemption set at the time of the First Crusade is loosely based on Torquato Tasso’s epic poem Gerusalemme liberata (Jerusalem Delivered), and its staging involved many original and vivid effects. It was a great success with the public, despite negative reactions from literary critics hostile to the trend towards Italian entertainment in English theaters.

Handel composed the music for Rinaldo quickly. Much of it is borrowings and adaptations from operas and other works that Handel had composed during his long stay in Italy during 1706–10. In the years following the premiere, Handel frequently introduced new numbers, discarded others, and transposed parts to different voice ranges. Despite the lack of a standard edition, Rinaldo’s spectacular vocal and orchestral passages make it one of Handel’s greatest operas. Of its individual numbers, the soprano aria “Lascia ch’io pianga” has become a particular favorite and is a popular concert piece.

Handel went on to dominate opera in England for several decades. Rinaldo was revived in London regularly up to 1717, and a revised version was presented in 1731. The opera was also performed in several European cities. During Handel’s lifetime, Rinaldo was the most frequently performed of all the composer’s musical dramas.

After 1731, however, the opera was not staged for more than 200 years. Renewed interest in baroque opera during the 20th century led to the first modern professional production in Handel’s birthplace, Halle, Germany, in 1954. The opera was mounted sporadically over the following thirty years. After a successful run at New York’s Metropolitan Opera in 1984, performances and recordings of the work have become more frequent worldwide. The opera’s tercentenary in 2011 brought a modernized production at the Glyndebourne Festival.