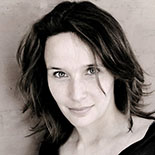 Critics have praised Grimaud’s willingness to reinterpret works and take chances, and compared her to Glenn Gould: Grimaud doesn’t sound like most pianists: she is a rubato artist, a reinventor of phrasings, a taker of chances. “A wrong note that is played out of élan, you hear it differently than one that is played out of fear,” she says. She admires the “more extreme players . . . people who wouldn’t be afraid to play their conception to the end.” Her two overriding characteristics are independence and drive, and her performances attempt, whenever possible, to shake up conventional pianistic wisdom. Brian Levine, the executive director of the Glenn Gould Foundation, sees in Grimaud a resemblance to Gould: “She has this willingness to take a piece of music apart and free herself from the general body of practice that has grown up around it.”