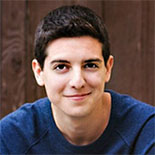 Shane Feldman, born November 8, 1994, is a motivational speaker and critically acclaimed producer. Shane has been recognized by The United Nations Youth Assembly and President Obama’s volunteer initiative, “serve.gov”, and he has been listed on Youth In Motion’s Top 20 Under 20 list.

Feldman is the founder and CEO of Count Me In, the largest youth-led organization in the world. Born out of what Shane describes as a challenging transition into high school in 2008, Count Me In is an entirely student-led charity and global brand that helps young people find their passion through community involvement. With Shane at the helm, Count Me In has impacted more than 10 million young people to date through speaking tours, educational programs and major broadcasts.

On Tuesday, April 29, 2014, Shane produced Count Me In’s first global broadcast. Featuring a diverse line-up of celebrity speakers and entertainers, including Cody Simpson, Nikki Yanofsky, Luke Bilyk and Jessica Tyler of Degrassi fame, Ashley Leggat, Fefe Dobson and other teen icons, the show was designed to motivate young people everywhere to get involved and volunteer in their own communities for a cause of their choice. The first annual Count Me In broadcast had an international reach of over 2.2 million, with viewers tuning in from 69 countries.