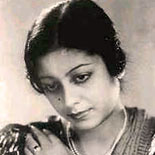 She was among the early singing stars of Indian cinema, and is credited popularly as the first star of Bengali cinema. Her singing style, usually in rapid tempo, was used instrumentally in some of the biggest hits of New Theatres, Kolkata.