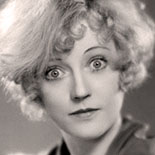 Davies was already building a solid reputation as a film comedienne when newspaper tycoon William Randolph Hearst, with whom she had begun a romantic relationship, took over management of her career. Hearst financed Davies’ pictures, promoted her heavily through his newspapers and Hearst Newsreels, and pressured studios to cast her in historical dramas for which she was ill-suited. For this reason, Davies is better remembered today as Hearst’s mistress and the hostess of many lavish events for the Hollywood elite. In particular, her name is linked with the 1924 scandal aboard Hearst’s yacht when one of his guests, film producer Thomas Ince, died.