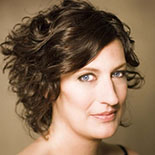 Although best known for her baroque and classical roles, Connolly has a wide-ranging repertoire which has included works by Wagner as well as various 20th-century composers. Connolly was appointed Commander of the Order of the British Empire in the 2010 New Year Honors.