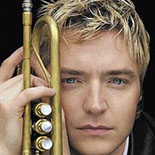 In 2013, Botti won the Grammy Award in the Best Pop Instrumental Album category. He was also nominated in 2008 for his album Italia and received three nominations in 2010 for the live album Chris Botti In Boston. Four of his albums have reached the No. 1 position on the Billboard jazz albums chart.

Coming to prominence with the 2001 recording of his Night Sessions CD, Botti established a reputation as a versatile musician in both jazz and pop music for his ability to fuse both styles together.