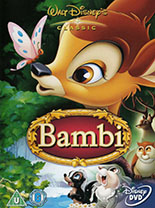 Bambi is a 1942 American animated drama film directed by David Hand (supervising a team of sequence directors), produced by Walt Disney and based on the book Bambi, A Life in the Woods by Austrian author Felix Salten. The film was released by RKO Radio Pictures on August 13, 1942, and is the fifth film in the Walt Disney Animated Classics series.

The main characters are Bambi, a white-tailed deer, his parents (the Great Prince of the forest and his unnamed mother), his friends Thumper (a pink-nosed rabbit), and Flower (a skunk), and his childhood friend and future mate, Faline. For the movie, Disney took the liberty of changing Bambi’s species into a white-tailed deer from his original species of roe deer, since roe deer do not inhabit the United States, and the white-tailed deer is more familiar to Americans. The film received three Academy Award nominations: Best Sound (Sam Slyfield), Best Song (for “Love Is a Song” sung by Donald Novis) and Original Music Score.

In June 2008, the American Film Institute presented a list of its “10 Top 10″—the best ten films in each of ten classic American film genres—after polling over 1,500 people from the creative community. Bambi placed third in animation. In December 2011, the film was added to the National Film Registry of the Library of Congress. 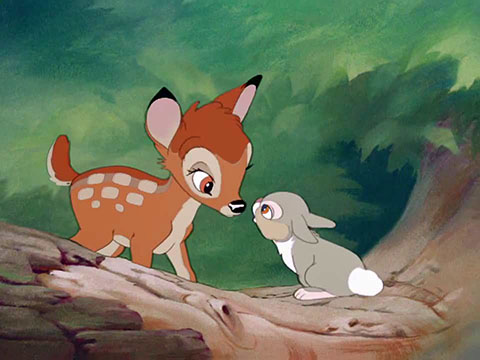