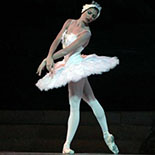 Her company became the Ballet Nacional de Cuba in 1955. Alicia is most famous for her portrayals of Giselle and the ballet version of Carmen.

From the age of nineteen, Alonso was afflicted with an eye condition and became partially blind. Her partners always had to be in the exact place she expected them to be, and she used lights in different parts of the stage to guide herself.