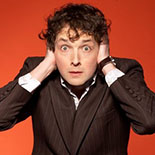 Christopher David “Chris” Addison (born November 5, 1971) is a British comedian, writer, actor and director from Manchester. He is perhaps best known for his role as a regular panellist on Mock the Week. He is also known for his lecture-style comedy shows, two of which he later adapted for BBC Radio 4.

In addition to stand-up, Addison played Ollie Reeder in the BBC Two satire series The Thick of It and Toby Wright in its spin-off film In the Loop, starred in the Sky Living comedy-drama Trying Again and appeared in several episodes of series 8 of Doctor Who. He also co-created and starred in the BBC Two sitcom Lab Rats. On radio, he previously hosted the weekly comedy news satire show 7 Day Sunday on BBC Radio 5 Live from 2009 to 2010.